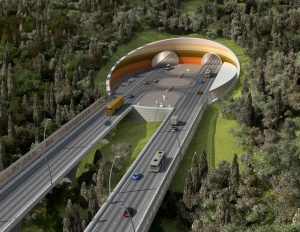 For Stroyproekt, its participation in development of new transport facilities in Sochi is not just contribution to the success of the Olympic Games which Russia has been awaiting for many years and organisation of which had to be won in stiff competition.  After the Olympics 2014 these new roads and interchanges will determine a future development of the city.
All Sochi projects of Stroyproekt are aimed at resolving the problem of high transport load to the city centre.

New transport facilities for the Sochi Olympics are innovations in the Russian road construction. An extremely complicated mountain relief, seismic risks and unstable soil demanded for a high professionalism of designers and Stroyproekt had to face these challenges. Besides, our designers had to comply with strict environmental requirements and to design a number of facilities to be located in space-limited urban areas. Our designers have applied state-of-the- art methods and solutions, including innovative ones. Actually these class road facilities have been never built for these types of conditions.

Stroyproekt have contributed to the following transport infrastructure projects in Sochi: