Small Bridges in the Historical Centre of St. Petersburg: Review 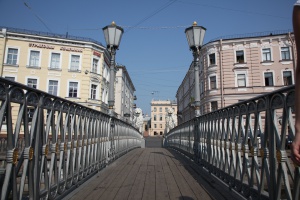 In the mid-1990s Institute Stroyproekt developed its first designs for rehabilitation and overhaul of historical bridges in the city centre. Since then Stroyproekt has often dealt with cultural and historical heritage monuments of the Northern Capital and this experience is extremely valuable for the company. Since its foundation Stroyproekt has been implementing projects in various Russian regions, however we are very proud of our contribution to development of transport infrastructure in our home town as well as of belonging to St. Petersburg engineering school.

The first project of Stroyproekt in the city historical centre was Belinsky Bridge across the Fontanka River.  Stroyproekt developed detailed design documentation for overhaul of this bridge (1996–1999).

The brick bridge in this place was built in 1784 (Simeononvsky bridge)
Main parameters:
- Bridge length: 56.6 m
- Span layout: 21.3+14.0+21.3 m
Initially the bridge had a draw span. During the reconstruction of 1858-1859 the draw span was covered with a brick vault faced with granite arches. In 1890, in order to widen the bridge carriageway the sidewalks were relocated to cantilevers. For this purpose four cast-iron brackets were installed on piers and abutments at either bridge side to accommodate sidewalk steel beams.
Scope of overhaul:
- Replacement of sidewalk steel supporting structures; removal of massive cast-iron brackets and their replacement with hidden light steel cantilevers with the reinforced concrete counterweights installed inside the arches;
- Injection of piers;
- Relocation of engineering and communication utilities passing through the bridge;
- Placement of sleeperless tram lines; reconstruction of hand rails;
- Replacement of arch spans waterproofing;
- Granite facing renovation and curbing.
After the overhaul of 1997-1998, in 1998 Stroyproekt developed the design for overhaul of the bridge superstructure in connection with reconstruction of the carriageway and tram lines both in Belinsky Street and Belinsky Square.

Then Stroyproekt has adjusted the detailed design for overhaul of Novo-Kalinkin Bridge across the Obvodny Canal (1997).

In  1998 Stroyproekt prepared the investment feasibility study and detailed design documentation for repair of Kazansky Bridge across Griboyedov Canal.

Kazansky Bridge was built in 1766 to replace an old wooden bridge (architects: I. Golenischev-Kutuzov and V. Nazimov); in 1805 the bridge was reconstructed and widened to the present dimensions (L. Ruska).

In 2000 Stroyproekt developed detailed design for overhaul of Lviny Bridge across Griboyedov Canal.

This single-span footbridge was built in 1827 (designed by engineers V.A. Khristianovich and G.I. Tretter).

The main bearing element of the bridge is a 22.2 m long span, designed as two I-beams of low-alloyed steel; a distribution beam connected with the chain suspension system is located underneath the decorated façade, a cast-in-situ reinforced concrete slab was constructed under the pylons within the outlines of iron pedestals for sculptures. The bridge floor is made of wood. .

The overhaul design has allowed preserving the original bridge suspension system of 1827 and restoring the bridge historical look.

The First Sadovy Bridge across the Moika River became a landmark in the history of Stroyproekt (2000–2002).

This single-span bridge built in 1835–1836 was originally called Mikhailovsky Bridge (engineers P. Bazen, A. Gotman and I. Buttats). The original brick vault structure was replaced with a steel double-hinge arch during reconstruction of 1906–1907 (to the design of A. Pshenitsky).

Overhaul of Okhtinsky Bridge No. 3 across the Okhta River (2000–2003) was accompanied by discovery of a new historical and cultural monument of the early 20th century. 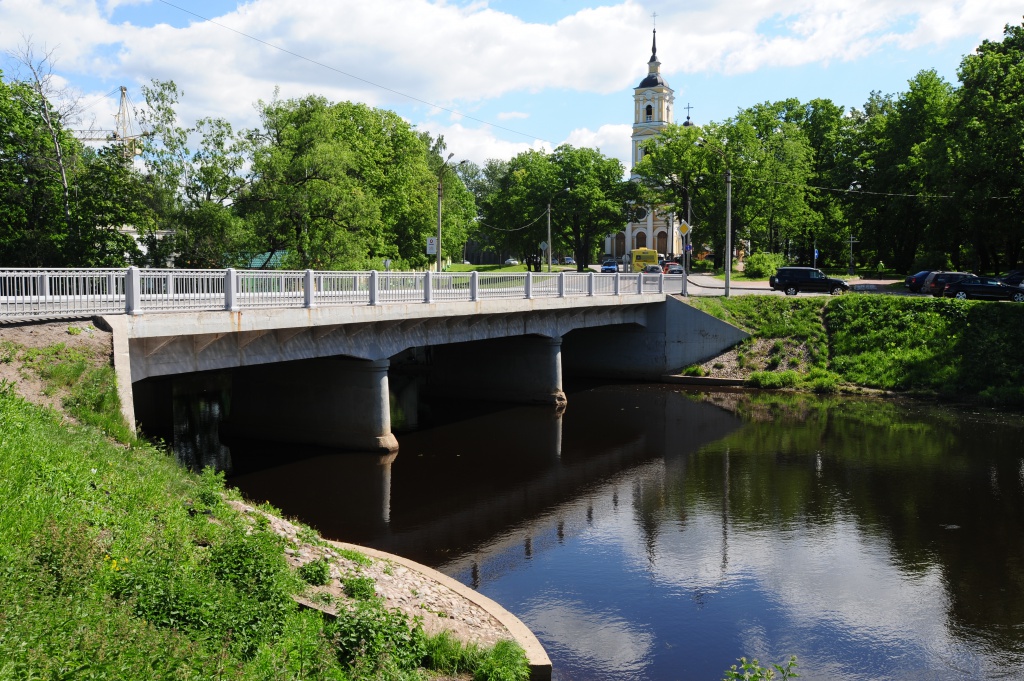 The bridge is a historical and a cultural monument of the early 20th century (the oldest remaining bridge of cast-in-situ reinforced concrete in St. Petersburg. Engineer: G. Girshson, 1912).

Main technical parameters:
– length: 35.9 m
– span layout: 11.2+13.5+11.2 m
– width: 11. 2 m (Г-6,2–6,4+2х2,2 м).
The project provided for preservation of the old bridge (with small changes) and construction of the second bridge upstream for adding another traffic lane. The continuous composite beam deck repeats the layout and shape of the old bridge.
The project has been approved by the Scientific Council of St. Petersburg for Cultural Heritage Preservation.

In 2002–2003 Stroyproekt developed design and detailed design documentation for overhaul of Pochamtsky Bridge across the Moika River.

This pedestrian single-span bridge was built in 1823–1824 by engineers V. Tretter and V. Kristianovich. Initially it was a chain bridge; in 1905 the bridge was supported by two wooden piers based on piles.
Main technical parameters after reconstruction:
- design span: 35 m
- pylons height: 2.43 m
- depth of steel stiffening beam: 0.3 m. 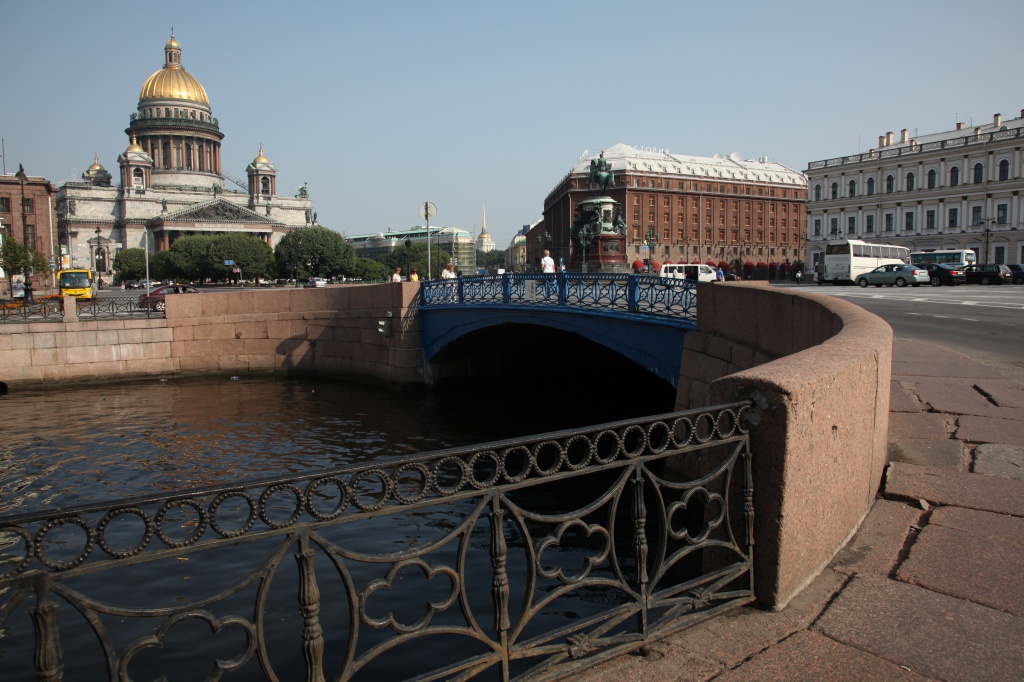 The bridge was built in 1818 (widened in1842 and reconstructed in 1930 when the cast-iron tunnel vault was replaced with a reinforced concrete vault). In 1938 the bridge was rehabilitated.

The Project includes:
– strengthening of the deck, construction of a reinforced concrete relieving vault above the existing cast-iron tunnel vault;
– preservation of the existing bridge and partial restoration of its historical  appearance in compliance with requirements of the Committee for State Control, Use and Protection of Historical and Cultural Monuments
– repair of the cast-iron tunnel vaults.

Implementation of this project had been postponed several times, and started in 2012.


The small bridges of the old Petersburg made a new chapter into the history of Stroyproekt not only as outstanding engineering projects but as a unique opportunity to deal with the great past and to feel a historical atmosphere of “The city of bridges”. All these projects required a sensitive and careful attitude, certain historical knowledge and a sense of beauty. The experience gained with the small bridges has later facilitated our work for major and more complex projects. These were large historical bridges across the Neva - Alexander Nevsky, Troitsky, Blagoveschensky and Dvortsovy bridges - and new overpasses, traffic interchanges and roads in St. Petersburg. The knowledge and expertise got from “the small” historical bridges projects have been very useful to realise our role in development of the 300-year bridge building tradition of St. Petersburg.